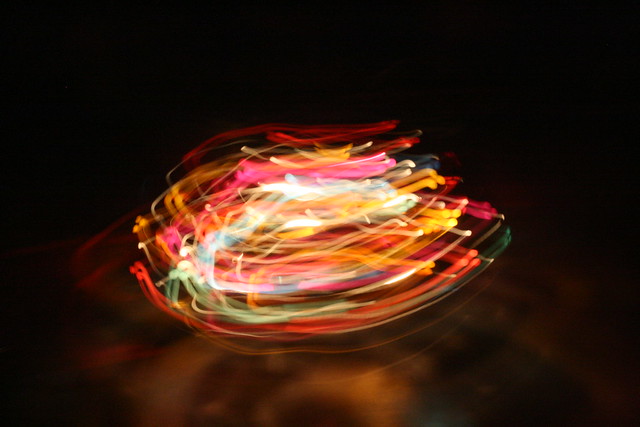 thanks to Bob Doran on flickr for his light experiment

Earlier today the twitter-based #eltchat group were discussing experiences of, and opinions about, some “alternative” teaching techniques, namely the Silent Way, TPR (Total Physical Response) and Suggestopedia. I mentioned a method I’d experimented with years ago – an Accelerated Learning self-study course, loosely based on the principles of Suggestopedia – and how I’d been amazed by the results. 140 characters certainly weren’t enough to be able to go into it in detail and as the conversation moved on I offered to write a blog post about the experience. So here it is!

I was studying for an MA at Reading university at the time and preparing to tutor on a teacher training course preparing Thai secondary school teachers to set up self-access centres in their schools. As part of my preparation I decided to follow a self-access language learning course myself, to put myself in the students’ shoes and use the experience to feed into the course. My plan after finishing my MA was to look for work in Latin America and I wanted to start studying Spanish. At the time I was a confident and fluent user of Italian, so it wasn’t that challenging and my motivation was certainly high. In order to counter these very positive factors I decided to opt for an approach that I had no experience of, and had some reservations about its efficacy. It was the hype more than anything else that made me skeptical. Anything that promises such amazing short term results seemed too good to be true. So my mindset as I approached my first Accelerated Learning lesson was far from perfect.

But I was also ready to give it a fair chance. I was going to follow the rules to the letter, do as I was instructed, no matter how skeptical I felt and see where it led me. I was amazed by the results.

Now this all happened a long time ago, when self-access centres were language labs, with tapes and print books and a lot has changed since then, including the courses offered by the Accelerated Learning company. I have to admit that my memories are patchy too, and the learner diary I kept is gathering dust in a box in someone else’s attic far away! But I’ll try and describe that first lesson as well as I can.

The course was story-based and the first part of the first lesson consisted of listening to the first episode of the story. Although the language was obviously graded and the dialogue included basic greetings and the functional exponents you’d expect in the first unit of a coursebook, the story itself was narrated in the past, using simple, continuous and perfect verb forms. There was a lot of repetition and images to support understanding and the first impact with the language was purely passive. I spent an hour in the language lab and didn’t have to say a word. The emphasis was on exposure and absorbing the language. The same story was told in three different ways. Firstly with music in the background and read by one narrator. My task was to follow the script and the images on the page. This is where my knowledge of Italian came in handy. There are so many cognates, so many similar structures that I could pick up a lot simply from reading and comparing with Italian. And the obvious comparison also helped me notice differences as well as similarities. I think this L2 hook helped as much as anything.

The second reading was dramatized, with voices for the characters. I can’t remember their names, but the basic story was a mystery based on a journey. A man travels from the States to Mexico, I can’t remember why, but he’s carrying – or receives – a package that he has to deliver to an unknown person at an unknown address. Sorry, all a bit patchy more than15 years later! So the story includes very simple, core functional exponents for greetings, exchanging names, asking for personal information, but the context of the story lifts it above a banal first meeting. There’s a love interest too, of course, as in all good stories!

So far, so good. Nothing too way out. I’d listened to and understood the story and was ready for some form of testing or production or practice. But the third stage was yet another listening. I was asked to close my eyes, make myself as comfortable as possible, preferably in an armchair (not possible in the language lab unfortunately) and listen to the third reading, concentrating on the music and not the words. This time the background music was foregrounded, the narrated story was very, very quiet in the background. This was getting a little out of my studying comfort zone, but I followed the instructions as well as I could. When the third reading finished I was told to close my book and go away and do something active for at least an hour and not to come back to the book until the next day.

I followed the first part of the instructions. Walked home to my student flat, bought some food on the way, got home and cooked, chatted to flatmates. I hadn’t brought the book home with me, so I couldn’t cheat on that count, but what I did do was sit down and try and write the story text from memory. And that’s when I was amazed. I had retained whole chunks of the story. I was able to write down at least 80% of the text in one sitting, with hardly any effort to recall whatsoever. When I compared my text with the one in the book the next day I found that a lot of what I’d written was word perfect. I think the support of Italian played a huge part in that, but still, the story must have been at least 300 words long. I wonder whether any other approach would have furnished me with the confidence and structure to reproduce a whole text, including narrative verb forms and dialogue after just one hour.

Now, I have to admit that once the training course got under way and we’d explored the pros and cons of learner diaries I dropped the experiment and didn’t get much further with my self-access learning course so I can’t comment on long term effects.  One year later I was living in Madrid, immersed in a very different form of accelerated learning!

Still, some food for thought I guess. And a lesson in not judging by appearances and hype!  But was it just a flash in the pan? Was it just a typical example of the Hawthorne effect?  Or is this something we should be learning from and taking into our classrooms – online or off?  What do you think?

Do you have any interesting learning experiences to share – alternative or not – I think the crowd over at #eltchat would like to know … and me too of course!  Leave a comment, or if you write about one on your blog, could you send me the link?  Thanks!

This entry was posted in #eltchat, musings, thoughts on learning and tagged #eltchat, approaches, experiment, learning. Bookmark the permalink.

10 Responses to a learning experiment