I’m in Bilbao this weekend. And I’m loving it. Here’s an image I found on flickr before I travelled up. It was so good to find the exact spot where it was taken and compare the image with my reality. 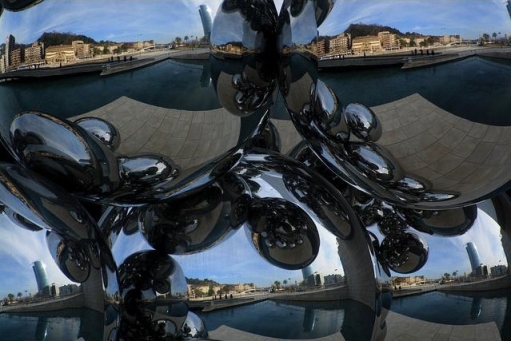 I used the image in the sessions I’ve been presenting over the weekend. I’ve given this workshop before, it’s a variation of the session I gave at IATEFL UK last year. Many of the core activities are the same. But in revisiting the workshops and tweaking it for its new context, it opened up a new train of thought.

I suddenly realized that my interest in images and, in particular, close-ups, is actually relatively recent. And it’s digitally- mediated.

Before the advent of digital cameras, I was a pretty poor amateur snapshot-taker but digital display, and more importantly, the focus and attention that comes from sharing photos, means I now take more photos – and take more care.

I’ve always used images in class.  Ten, fifteen, twenty, years ago they would have been laminated colour copies of pieces of art, jealously guarded and used and re-used over and over again.  But it wasn’t until I had a projector and/or my laptop in the class that I really realized the power of images.  The impact of a beautiful image projected onto the classroom wall is powerful. Amd of course, if it comes from your life, your world, if it was taken by one of your students, or hunted down online to represent the thoughts and feelings in your head, so much more so.

So, not a particularly big thought, but definitely one that refreshed my desire to share my personal take on the power of images and their role in the language classroom.

You can click here to see the Bilbao version of the presentation Unleashing the Power of Images.

This entry was posted in musings, using images and tagged images. Bookmark the permalink.

6 Responses to A short footnote