A close up on translation

Inspired by the twitter #ELTchat conversation yesterday about using translation in class, I’ve decided to take a closer look at a couple of my favourite translation activities.  (I have to confess that I wasn’t actually able to take part in the chat but I followed it later via the transcript and Shaun Wilden‘s great summary .)

The activity I’m going to talk about in this post is one I’ve used with Spanish speaking students at an intermediate plus level (and in workshops with Spanish speaking teachers or teachers based in Spain).  It kicks off with the image of a storm, for example like this one by MontyPython on flickr (a creative commons image).

I ask students to imagine the sounds and sensations surrounding the storm and we brainstorm vocabulary to describe the image and the emotions it conjures up. I ask them to think back to when they were last in a storm: where were they? what time of day was it? what were they doing? how did they feel? what could they see and hear?  We then share storm stories, as a whole class, in groups, in pairs – whatever seems to fit at the time.

2 introducing the text for translation

I explain that we are going to read the opening paragraph from a novel.  The novel opens in the middle of a storm, and the main character is introduced to us.  I ask them to answer the following questions:

Here is the opening paragraph.

Alexander Cold awakened at dawn, startled by a nightmare. He had been dreaming that an enormous black bird had crashed against the window with a clatter of shattered glass, flown into the house, and carried off his mother. In the dream, he watched helplessly as the gigantic vulture clasped Lisa Cold’s clothing in its yellow claws, flew out the same broken window, and disappeared into a sky heavy with dark clouds. What had awakened him was the noise from the storm: wind lashing the trees, rain on the rooftop, and thunder.

When we’ve discussed the questions I set, I ask them what they think the title of the chapter might be. I tell them it’s one word, and that the word is in the description. The answer is nightmare.

3 translating the text from English to the students’ L1 (Spanish)

I explain that the text was originally written in Spanish and that I’m going to ask them to translate it back into its original language. I stress that I don’t want them to translate word for word, but to think about how best to capture the atmosphere and the details in their own words. Some negotiation of meaning is usually necessary with the more difficult or specific vocabulary. I paraphrase or mime (e.g. claws) and let the students decide on the correct term for translation. This stage does not usually take long.  The negotiation is often in a mixture of English and Spanish.

4 comparing their version to the original

I then show them the opening paragraph in the original version of the novel and ask them if anybody recognises it or its author.   It’s taken from Isabel Allende’s City of the Beasts, La cuidad de las bestias, a novel written for young adults. I ask them if any of them know it, or would like to read it. I usually take a copy into class and hand it around, encouraging the students to ask questions about it if they’re interested. 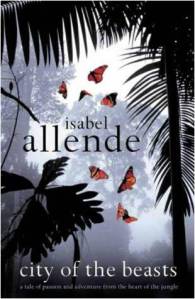 Here’s the opening paragraph in Spanish.

I ask the students to compare the two versions and comment on any differences.  I do this as a whole class acitvity in order to bring the language of discussion back to English.  We look back at the English version and there is usually a sense of betrayal.  The students feel that their translation would have been “better” (closer to the original) if the English translation had been “better”.  I ask them to pinpoint specific passages where they think the English has misled them, or let the original down.  We look at these passages and see where the problem might lie which brings us into the next stage.

5 identifying differences between the two languages

Here’s one example.  The English text says : What had awakened him was the noise from the storm. This cleft sentence prompts a cleft structure in Spanish:  Lo que le  despertó fue el ruido de la tormenta.In the original Spanish text there is no cleft, but a simple fronting of the verb.   This prompts a discussion about how sentence syntax in Spanish is more fluid than in English.  The verb can precede the subject, but in order to front the verb in English we need to bring in a “dummy subject” – in this case the cleft structure “what …. was”. We look at how else the sentence could have been translated and if we have any preferences:

He had been woken by the storm. / The storm woke/awakened him up. / It was the storm that had awakened/woken him.

Why do I like this kind of activity? I think the students get a kick out of criticising the English translation, of being able to change it and improve on it. It puts them in the position of being the experts. They know the language of the original version better than I do, they love to explain the niceties and nuances of the Spanish text to me. I think that putting them in the position of being the experts boosts their confidence, and that seeing a text from their L1 translated into English strengths the links between English and their own personal linguistic and cultural identity.

I also like it because it encourages intensive reading and noticing of the forms of the language.  The level of concentration and engagement is invariably high when they are translating and comparing the two texts and they come away feeling that they’ve worked hard and learnt something.  Not a bad pay off!

Of course, I wouldn’t use this type of activity all the time, but every now and then, to shift the focus, to provide variety, I’ll look for other bi-lingual texts in other genres (there are plenty of sources around, tourist information, museum guides, endless websites) also reversing the language direction and choosing texts that have been translated from English to Spanish, but not very successfully. This really helps point out the pitfalls of translation too!

In another post I’d like to explore activities that can be used with multilingual classes and in monolingual classes where the teacher doesn’t know the students’ L1.

This entry was posted in using literature in the ELT classroom, using translation and L1 and tagged contrastive analysis, lesson plan, literature, translation. Bookmark the permalink.

21 Responses to A close up on translation