In my last lesson the ebeam gave up the ghost halfway through, leaving me with my traditional whiteboard and pen. It certainly wasn’t a drama. The lesson continued and we didn’t really miss the IWB that much.  Until the end, that is.  I usually save the boardwork from the IWB at the end of each lesson and send it to the students by email. Not that lesson.  I don’t think it really mattered.

But for today’s lesson I remembered to take my digital camera … just in case.

Of course, the IWB worked like a dream. But I still took a couple of photos just the same, hoping to capture the way the board, the projector and the ebeam work together in a typical “integrated whiteboard” lesson.

I didn’t plan the boardwork beforehand.  I just took a couple of shots just before cleaning the board or moving on to a new stage and brought them home to mull over.

Here’s the first one: 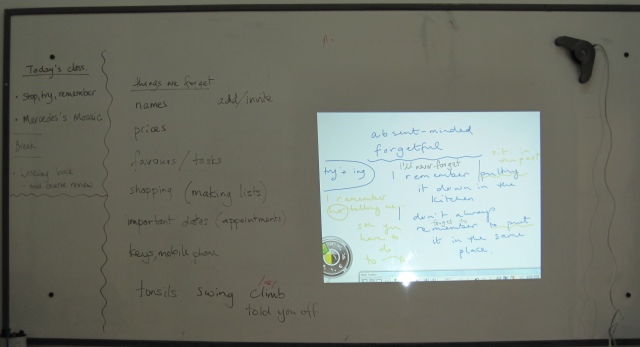 On the left you can see our lesson “menu”.  The first point in the menu was a request from one of the students in a past lesson. When I asked them if there was anything in particular they’d like to do or work on, one student had asked to look at the use of -ing verbs and infinitive with stop, try and remember.   This is what the board looked like at the end of that stage.

In the previous lesson a student had shared a link to an awareness test video and we’d talked about how observant/unobservant we were. So, linking back to that discussion, I asked the students to think about two more adjectives: absent-minded and forgetful and to discuss in pairs whether, and to what extent, those adjectives applied to them.

In the feedback stage we drew up a list of things that are easy to forget (the second column on the board) – all of these came out of their previous discussion. We talked a lot about how to remember names, list-making, birthdays and my total inability to keep a track of where my mobile is.  As we talked I was aware of “farming” for examples of remember to and remember +-ing.  I was aware of using them as we talked, but I didn’t highlight them until the discussion had come to a natural conclusion.

Then I moved to the IWB section of the board for the grammar presentation stage. This was something I wanted to be able to save and send the students.  I wrote the two examples on the board – they were two things I’d said during the discussion.  I asked them to look at “it” and tell me what it referred to – and then in pairs they discussed why the -ing form was used in the first example and to + inf in the second.  I fielded their suggestions in yellow (sorry, it’s not very clear in the photo).

We then went back to our discussion and each person recapped their contributions using the two forms.  We then moved on to discuss our earliest memories. This was a great discussion.  With lots of opportunities to use the target language, but not pushed.  The four items at the bottom of the board (tonsils, swing, tell off and climb) came out of this discussion.

The menu has stayed on the left, the key vocabulary from the previous stage has moved into the bottom left hand corner.  We’ve just been discussing a photo mosaic that one of the students put together as a follow up task from a couple of lessons ago (point two on our menu).  It shows the seven wonders of the world plus the finalists in a 2007 online competition.  Having named the wonders (in green, in traditional pen – we could have used the IWB pen but there wasn’t really enough room and I didn’t want to write on the images) and worked out which were on the final list and which were runners up, we talked about who had visited where, when and why.  Another really interesting discussion.  Very student-led. Lots of remembering, which was great, although that hadn’t been my aim in using this image.  We always have a kind of “show and tell”  stage in every lesson of images, video clips, slideshows, songs that the students want to share and I’d promised to look at this particular one today.

The Sept/Oct/Nov line is there for the next stage. As I’m taking the photo the students are remembering the topics we’ve covered so far on the course.  We’ll go on to write them on the board, talk about favourites and make plans for the next month.

Sorry, a very long post. More description than analysis – but I just wanted to share a couple of snapshots of how the new and the traditional are blending in my classes at the moment.

This entry was posted in thoughts on teaching and tagged boardwork, IWB, old and new. Bookmark the permalink.

10 Responses to The integrated whiteboard